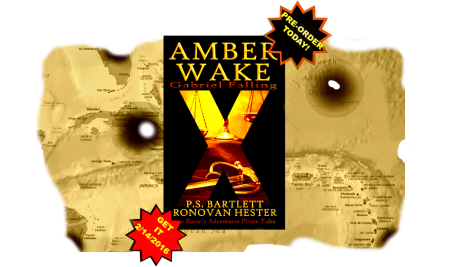 The autumn of 1705 brings Royal Navy Captain Gabriel Wallace to face off against an enemy within the ranks of the Admiralty itself that threatens his career, his reputation, his family, and something even more far-reaching in its plot.

Court-martialed and with Admiral Chambers, the mastermind fearfully known as the Chambers of Hell, out for his destruction, Wallace finds he has allies willing to face the might of the mightiest power on earth, with some allies in the most unlikely of places. The crew of his former command, the Majesty’s Venture, mutinies from the Royal Navy. With capture by his enemies close behind, Wallace agrees to become captain once again.

With a ship at his command, Captain Gabriel Wallace sets out to fulfill his mission, the completeness of which only he knows.

Now a pirate by situation, Wallace sets out for the Colonies and the Caribbean. Will his crew remain loyal as they leave a life the rule of the Royal Navy behind? Will  his lifelong friend Miles Jacobs follow Wallace’s lead without knowing the whole story? Finally, will  the young Lieutenant Maddox Carbonale remain a follower or try to become captain himself?

With these questions in his thoughts, Gabriel Wallace wages war on Chambers and goes after the largest haul in the history of the Spanish Main. Whom does Wallace meet along the way? To whom are his loyalties to: vengeance or something more powerful?

If you love tales of adventure, of the sea, of the struggles of men, and nods to history, this is your book. Read Amber Wake: Gabriel Falling and you’ll have a new appreciation for all of The Razor’s Adventures Pirate Tales.

The smell of smoke began to fill my nostrils as I watched Miles race down the hallway towards the kitchen. I leapt to my feet and followed, finding it completely engulfed in flames.

“I suppose they may have meant to kill me after all! Unfortunately for them, they’ll have to burn London to the ground to kill me!”

“It’s too late, Gabriel! We must go!” Miles insisted.

The choking smoke began filling the house within seconds. I watched my family home being eaten swiftly by the spreading flames, as the three of us ran back towards the library.

“Wait here!” I shouted as I bounded up the stairs and returned with my and Adam’s belongings swung over my shoulder.

“Shall we, gentlemen?” Maddox moved to the front window and pulled back the curtains for a quick peek. Being unfamiliar with the man other than his prowess at the seduction of married women and his skills as a sleuth, I wondered if he was looking for those who’d set upon me this night to reduce my life to ashes, or for some more personal reason. With the house seconds from burning down around us, I no longer cared. I wanted only to stay alive and lay eyes on Adam.

“Might I be informed as to where we are going?” I shouted as we burst from the house into the darkness.

“The Majesty’s Venture!” Miles shouted back.

Would enjoy hearing what you think. Cancel reply